I have a love/hate relationship with herbs. I dislike them in soups and stews. I love them fresh. I know they add tons of flavor to food and are a staple in Azeri kitchen, but I shy away from them. The dislike for cooked herbs started when I was a child, and continued into adulthood for me. I have however started warming up to it slowly…I actually like sebzi gourma (it’s a type of plov where meat is cooked with tons of herbs) and dovga (a cooked yogurt and herb soup).

This brings me to yesterday: the weather in my part of the state has been horrendous. It’s been extremely humid, rainy and wet. My hair does not appreciate this weather. Nor does my body. Needless to say, I did not feel like standing in front of the stove and cooking yesterday, so I opted out for something quick and cold. I remembered I had a tub of yogurt I bought from the Russian store  that was soon to be expired. I thought of making dovga, but that again would require me to actually stand and mix for good 20 minutes on the hot stove. Then I remembered: DOGRAMACH! It’s pretty much the same thing as Dovga, with a few exceptions, one major one being that it requires NO COOKING, just some chopping.

This dish is very refreshing, it has aromatic herbs, chilled yogurt and cucumbers. You can’t get any more summery than this dish. It’s a Gazpacho of Azerbaijan cuisine 😀 The only negative about this dish is that herbs are harder to chop, especially when wet. Well, for me anyhow. I struggled with it yesterday, herbs sticking and spreading everywhere, but eventually managed to get them where they needed to go! Oh and an extra added bonus, my kitchen smelled divine!

NOTE: Buy your yogurt at a Russian/Turkish or Persian stores. We buy ours from both, and I am not sure where it is made, but it comes from a Turkish company in NJ. Your best bet for better tasting yogurt is to buy them from an ethnic store. 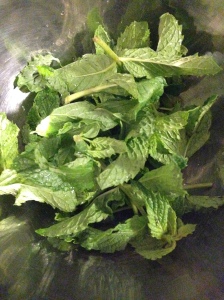 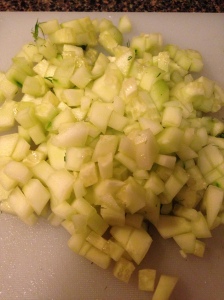 a handful of basil (to taste)

a handful of mint (to taste)

Pour yogurt and water into a pan, mix well until combined. If you want your soup thicker= add less water, thinned out = add more. Wash all the herbs and set aside. Start chopping. It really does not matter in what order you go, it all goes into the same pan anyways, but it’s easier to get the cucumber out of the way.Peel and chop up cucumbers, add to the yogurt mixture. Chop up the scallions. Next chop up mint and basil. Last but not least chop up the dill. Crush two garlic cloves and add them to the soup. Add salt, pepper, cumin (to taste), mix well. Set in the refrigerator if not eating right away. The soup will be chilled because the yogurt will be cold. Serve with bread, rye bread is your best bet!

NOTE: You can also add radish, or any other herbs you like. Traditionally boiled eggs go into this as well, if you prefer, you can hard boil, chill, chop and add them to the soup. This can also be made with ground or cubed beef. I would suggest cooking the meat first (sauteing or frying) and then adding it to the soup.